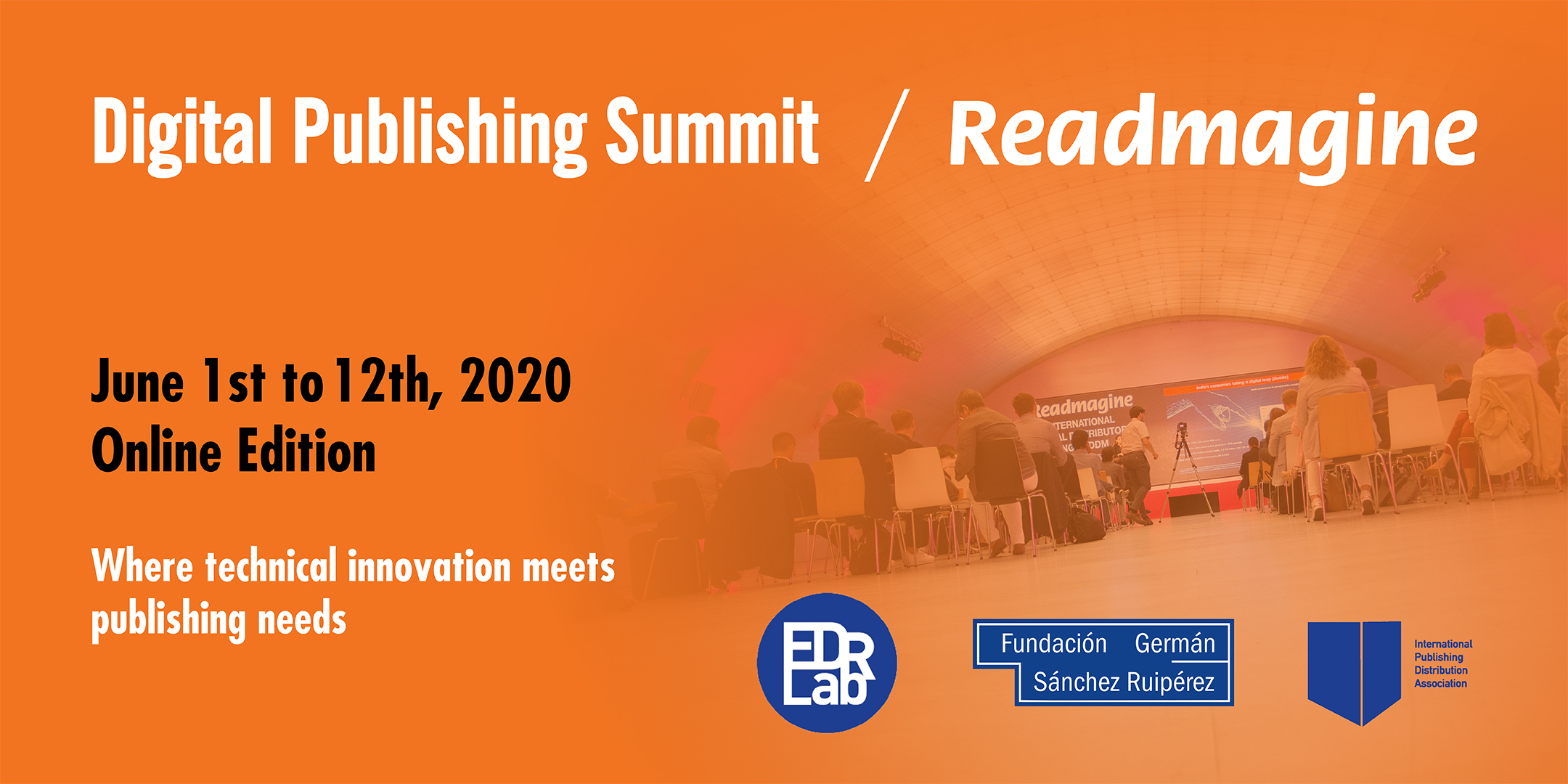 READMAGINE 2020 MANAGED TO ADAPT TO THE IMPOSSIBILITY OF BRINGING THE PARTICIPANTS TOGETHER AT CASA DEL LECTOR AS IN PREVIOUS EDITIONS THROUGH A COLLABORATION AND DIGITIZATION STRATEGY. THIS ORGANIZATION ALONG WITH DIGITAL PUBLISHING SUMMIT ADAPTED TO THE DIFFICULTIES THAT AROSE FOR A PHYSICAL EVENT DURING THE FIRST WAVE OF COVID-19 FOR A MEETING BASED ON THE INTERACTION OF SOME PROFESSIONALS WITH OTHERS AT THE VERY BEGINNING OF JUNE. THE BET THAT INVOLVED QUITE A FEW RISKS CATAPULTED READMAGINE AS A GLOBAL EVENT, WHICH DURING THESE DAYS IS BRINGING TOGETHER 550 PROFESSIONALS FROM THE INTERNATIONAL PUBLISHING INDUSTRY.

The president and CEO of the Kobo Rakuten group, summarized the power of the Readmagine and other online experiences at the end of his presentation with his conviction that after the pandemic it is smart to prioritize investment in people rather than buildings.
The CEO of  Rakuten Kobo said that what he learned so far fell into three categories:
What Rakuten Kobo would eventually discover, Tamblyn said, is that the more difficult challenge for the company was the manufacturing halt. “We were able to sell more e-readers with all of our 10,000 stores closed than we had forecasted to sell with them open,”. With “agility and speed,” the company’s international retailers had “decided to put their promotional focus” on e-reading as the pandemic descended on them.
And what the company had learned in this part of the experience was that it’s important to diversify vendors beyond one geographical area, because it’s not enough to have multiple vendors in the same market: “And the same is true of any children’s book publisher doing all their colour printing work in China.” He also declared: «This is a perfect time for the ebook. Over the course of 60 days, we gave away over 15 million books to people who were staying safe at home. The results were surprising…»
«A return to the physical experience around the book will be possible as long as there is no vaccine?Pleasure visits to bookstores, book clubs…
It will be interesting to see the commitment & reactions of people in the coming months»
When the Fundación Germán Sánchez Ruipérez organizers of Readmagine asked Tamblyn for a personal motto he proposed this one: “Under stress, we learn what is essential in reading – the words, the stories, knowledge, escape or immersion. Everything else is just a means of delivery”.

Asking how the brick and mortar booksops will evolve after de Covid-19 crisis will evolve it’s something a bit risky, as Michael Busch -CEO of Thalia Bücher GmbH- said in the opening of his presentation at Readmagine 20. His participation took place during the first week of June when the lock-downs in several European countries lasted for almost three months.
After the introduction by Jordi Nadal (the managing director of the Spanish publishing house Plataforma Edtorial), Busch declared that the invitation from Readmagine team to talk “about the future of brick and mortar after the Covid-19 crisis and things will change is always a view into the crystal box and maybe in one, two or three years time a lot of people are laughing about this video and say: this is the one who totally underestimated the change or who was too panicked about it”.
However, one of the wonderful surprises that Busch’s intervention contained was that, before delving into the description of the current situation, he did a quick and complete review of the strategic evolution and results of each of the operational phases during the last decade of the group he leads.
Other of the inspirational messages from Busch was his explanation of omni-channel optimization to tap the revenue potential, which is also a way to face the “ever-changing market situation where Thalia’s position in the market changes dynamically”, which Busch presented with as the relation between innovation and customers, illustrated with chessboards, because the transformations are moving much faster than in the last century. The chessboard is moving and you have to move in the same direction and faster and the CEO of Thalia is afraid that sometimes the book industry is not moving fast enough and in the right direction, furthermore “Corona showed us that something can come out of the blue and might change direction and the necessity of speed”.

When the anthropologist Verónica Reyero presented in Readmagine her insights on consumer trends during the lock-down there were few data on the hands of the content industry and the publishing community was very interested on understanding the impact of those extreme conditions might have upon this industry.

Reyero was introduced by Luis González (Director General of Fundación GSR) as a new effort from Readmagine to take a stock of how the people were behaving during the two or three first months of the global crisis.
The first idea from Reyero was: “Homo Sapiens have a great capacity to adapt to new contexts -we can live in the Sahara desert at over 45 ºC and in the North Pole under 30ºC. Its no surprise how quickly two thirds of the world´s population adapted to a total lock-down”.

What things will remain the same and what will change after Covid-19?
The social effects and consequences of confinement have been studied in the past by anthropologists, sociologists and psychologists. However, cases studied in the past were mostly focused on jail prisoners, and/or social experiments -like having a group of people in a small boat on the sea for a month-, and other extreme situations. But, what has happened in our homes since March? How have we been thinking and behaving? Has this situation changed us? And if so, how and why? The covid effects on our behaviours and attitudes requires a close examination. Many people reconnected with themselves, their houses, spouses, and even far friends and families through the numerous videocalls that happened in the first weeks. Remote work was already pending for years, and now it arrived to our lives in a matter of days.

“When we look into the first indicators of the pandemic impact on the digital market, we realize quickly that the first thing it did was to reinforce development and changes and shifts that have been going on already for a while,” explained Wischenbart. “It’s not something entirely new, but it was a strong accelerator of change and transformation.”

Valentine exposed how COVID-19 and its social distancing measures continue to cloud and disrupt daily lives across the globe, the beginning of the new decade has been marked by a sudden shock in the way media is consumed across all demographics, and has undoubtedly redefined the future of media consumption.

“The book industry is undergoing a tremendous change during the pandemic -and the companies that is the most resilient to these changes are the publishing houses and retailers that already digitalized a lot before Corona.” And also added: “This development will have far-reaching consequences from both a business and  a democratic point of view”.

All the content is in RENODO
Desplazarse hacia arriba

We may request cookies to be set on your device. We use cookies to let us know when you visit our websites, how you interact with us, to enrich your user experience, and to customize your relationship with our website.

Click on the different category headings to find out more. You can also change some of your preferences. Note that blocking some types of cookies may impact your experience on our websites and the services we are able to offer.

These cookies are strictly necessary to provide you with services available through our website and to use some of its features.

Because these cookies are strictly necessary to deliver the website, refusing them will have impact how our site functions. You always can block or delete cookies by changing your browser settings and force blocking all cookies on this website. But this will always prompt you to accept/refuse cookies when revisiting our site.

We fully respect if you want to refuse cookies but to avoid asking you again and again kindly allow us to store a cookie for that. You are free to opt out any time or opt in for other cookies to get a better experience. If you refuse cookies we will remove all set cookies in our domain.

We provide you with a list of stored cookies on your computer in our domain so you can check what we stored. Due to security reasons we are not able to show or modify cookies from other domains. You can check these in your browser security settings.

We also use different external services like Google Webfonts, Google Maps, and external Video providers. Since these providers may collect personal data like your IP address we allow you to block them here. Please be aware that this might heavily reduce the functionality and appearance of our site. Changes will take effect once you reload the page.